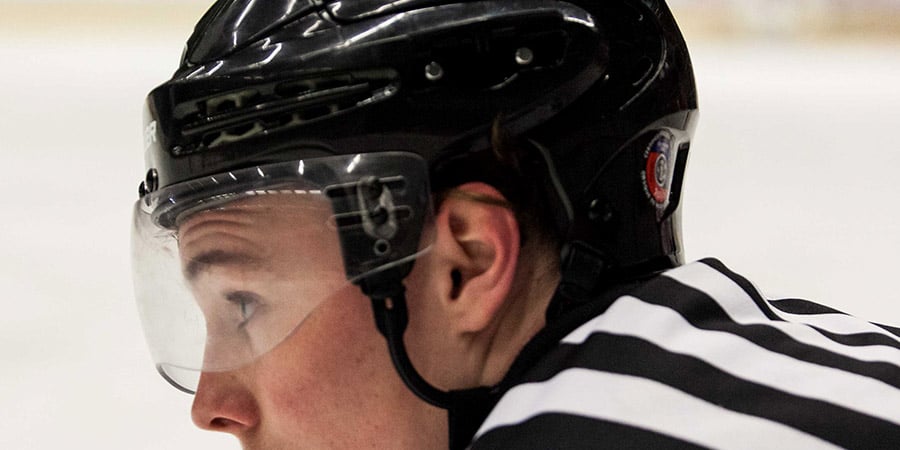 How strong are hockey visors?

Considering everything we know today about concussions and facial injuries, the fact that hockey players used to skate around without any kind of head protection seems like a piece of fiction. Concussions were just “getting your bell rung” and severe cuts to the face and head were badges of honor for goalies like Terry Sawchuk.

Just because it worked in the past doesn’t mean players should stick to it in the present, which is why the National Hockey League mandated helmets for new players in 1979. Almost 30 later, the NHL also required all incoming rookies to wear visors for eye protection.

Though the rule is on the books, the visor has been a near-constant point of contention for those who appreciate a more rough-and-tumble style of play. Some claim that the visor contributes to more injuries than it causes, but this is just a bit of wishful thinking – not only do visors prevent minor injuries from keeping a player off the ice for a shift, but they might also save lives.

Like any other piece of protective equipment, visors are specifically designed to resist force from a shot puck or errant stick that would otherwise cause serious harm to players. The Hockey Equipment Certification Council tests all equipment sold to hockey players at every level – you’ve probably seen the HECC sticker on the back of your first bucket.

To earn the HECC seal of approval, visors must go through a rigorous testing process that uses benchmarks set by the Canadian Standards Association. Though the standards are not public, the HECC explains that all visors are tested to resist impact without serious injury to the face. Because of their close proximity to the eyes, all certified products are made with a blend of shatter-resistant plastic that is also designed to absorb and deflect impact forces – if you’ve ever seen a slow-motion clip of a player taking a shot to the shield, you’ll see it bend but not break.

By far, the most common eye injury in hockey is due to pucks that are shot or deflected into players’ faces, and many visors are built to resist just this kind of force. In fact, Frontier Hockey, an official equipment supplier of the International Ice Hockey Federation, made a short video to show just how tough their visors really are.

In lieu of Zdeno Chara or Shea Weber launching bombs, Frontier chose to simulate the speed of an NHL-caliber slapshot by shooting it out of a small cannon. The first test was performed at a speed of 133 kilometers per hour, and the puck impacted the face shield in its exact center. A regulation puck tops out at 170 grams, so if you remember from your high school physics class that force equals mass times acceleration, that totals out to 4,974 pounds of force.

In the second test, Frontier cranked the speed up to 213.8 km per hour for a total of 7,996 pounds of force. Though the visor comes into contact with the head of the dummy, this would likely lead to only cuts and bruises as opposed to severe trauma.

Tobias Mattei, M.D., internist at Niagara Falls Memorial Medical Center, told the Washington Post that it takes about 1,100 pounds of pressure to fracture a human skull. It gets worse, though – the bones around the eye, known as orbitals, are as thin as egg shells in certain places and require much less force to fracture. If you’re not wearing a visor and you see that big lug of a defenseman line up for a blast from the point, the only thing that can keep you safe from serious injury is luck. In light of these numbers, you might forget that you wanted to buy a visor to keep laser vision correction a viable option after your playing career – you might want it to save your life.

The moral of the story? Always wear a visor. It doesn’t matter if you’re just learning to skate or are the best player in your beer league – visors should be just as important as your skates. Sure, they can fog up, and you might get chirped by the old guys on the ice that refuse to wear even helmets. All it takes is one stick in the lane or one hotshot trying to go bar down for your face to get in the way of a very dangerous chunk of vulcanized rubber.

Protecting your eyesight to remain a good candidate for a custom LASIK procedure is always a good idea, but when it comes to visors and hockey, it’s a matter of common sense.