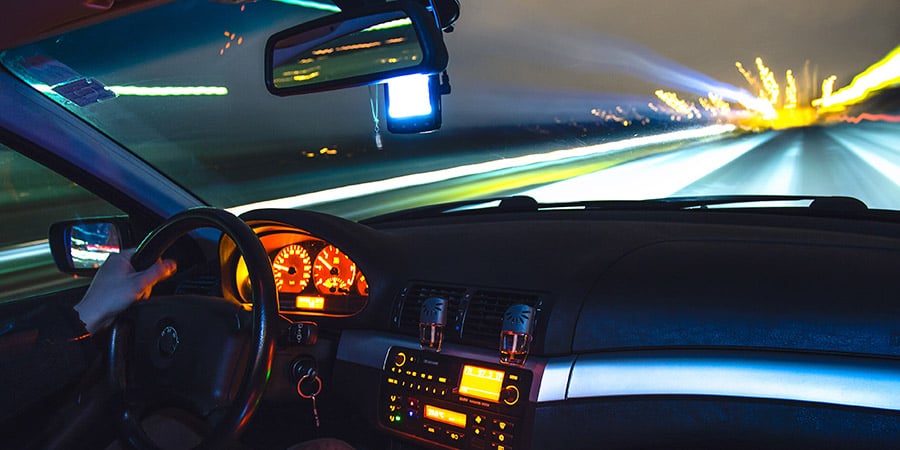 Driving at Night: The Dos and Don’ts

Driving at night can be an extremely dangerous activity, especially when factors such as inclement weather, a tired driver, or a driver’s less-than-perfect vision are taken into account. For these reasons and others, most agree that the most dangerous time to drive is late at night into the early morning hours. Dark conditions and tired drivers contribute to a greater number of accidents. However, there are many things drivers can do to make nighttime driving safer.

1. Don’t Stare into Other Drivers’ Headlights

This one might seem pretty obvious, but, like a deer in headlights, many drivers can often get mesmerized by those pretty round shafts of illumination flying past them on the other side of the road. Staring into another vehicle’s headlights can not only impair your vision as you are looking at them, but also even after the vehicle has passed. In order to avoid being blinded by the light, if you can safely do so, it is recommended to look away from the lights toward the right shoulder as the vehicle approaches.

Although many unsafe drivers ignore speed limits day and night, most speed limits are instituted for driving in clear and dry daytime conditions. As you may remember from driver’s ed, it is recommended to never “overdrive your headlights.” In other words, a driver’s headlights should illuminate the roadway ahead for approximately four seconds of headway. If your vehicle exceeds this general night-driving maxim, you are putting yourself at risk for hitting things in front of you, such as a suddenly stopped vehicle. You also never know when that stray deer, squirrel or, gulp, moose, may unluckily cross your path while you’re driving at night.

3. Use High Beams as Much as Possible

Ensuring that you use your high beams as much as possible may seem slightly counter intuitive. After all, high beams maintain the capacity to “blind” other drivers in front of you and on the other side of the roadway. But high beams should be used as much as possible — when they can be used safely — because they greatly improve visibility at night. When it’s foggy or rainy, however, for obvious reasons, they may do more harm than good. When dealing with an oncoming driver who forgets or refuses to turn off their high beams, it’s wise to attempt to remind the other driver to disengage their beams by flicking your own high beams only briefly. If the other driver still fails to disengage, follow the same advice as mentioned above and look toward the right shoulder of the road, away from the lights’ blinding glare, using your peripheral vision to drive.

Of course, even following all these suggestions assiduously, if your vision is not up to snuff and you try driving at night without glasses or contacts, you are putting not only yourself, but also passengers and other drivers, at great risk. If wearing glasses or contacts is a problem for you, a great idea would be to look into LASIK vision correction. Not only will LASIK improve your vision during the daytime, but it will help you see much better while driving at night. As for those concerns in the past regarding LASIK participants experiencing glare and halos while driving at night, the latest advances in Wavefront Optimized technology have vastly improved night vision.