METHODS: Twelve patients (14 eyes) with progressive keratoconus were prospectively treated with customized topography-guided PRK with the Pulzar Z1 (wavelength 213 nm, CustomVis) immediately followed by corneal collagen CXL with the use of ribofl avin and ultraviolet A irradiation.

Keratoconus is a progressive corneal disorder that can lead to severe vision deterioration through the development of irregular astigmatism and corneal scarring. Thus far, techniques that have been employed to improve vision in patients with keratoconus include the use of spectacles, rigid gas permeable contact lenses, intracorneal ring segment implantation,1,2 and, in the most severe cases, lamellar or penetrating keratoplasty.
It has been shown that the progression of the disorder can be impeded by ribofl avin-ultraviolet A (UVA) corneal collagen cross-linking (CXL).3,4 The application of CXL is capable of stabilizing the cornea in keratoconus and in postoperative refractive ectasia for up to 5 years after the procedure, but topography and visual outcomes of treated patients show only minimal improvement.5
The irregular astigmatism in keratoconus can be confronted with the use of customized laser ablations that restore the refractive properties of the anterior corneal surface. The application of customized topography-guided surface ablation has been reported in patients with stable or subclinical keratoconus with promising visual outcomes.6-8 The disadvantage of ablative procedures is that tissue removal might lead to further destabilization of corneal biomechanics and progression of the ectatic disorder. Until recently, the combination of CXL with laser ablation has been reported only as a two-step procedure of CXL with consequent photorefractive keratectomy (PRK).9
In this case series, we present a new technique and the results of simultaneous customized topography-guided surface ablation followed by CXL in patients with keratoconus.

In this pilot study, 12 patients (14 eyes) with progressive keratoconus were included. Mean patient age was 28 years (range: 20 to 39 years). Inclusion criteria were progressive keratoconus, hard contact lens and full spectacle correction intolerance, expected central corneal thickness (CCT) after PRK 400 μm, and no other corneal pathological signs. Keratoconus was described as progressive when there was an increase in the cone apex keratometry of 0.75 diopters (D) or alteration of 0.75 D in the spherical equivalent refraction, in a period of at least 6 months. Patients were informed about the experimental nature of the intervention, the possible outcomes, and the current clinical experience, and provided written consent according to the Declaration of Helsinki and institutional guidelines. 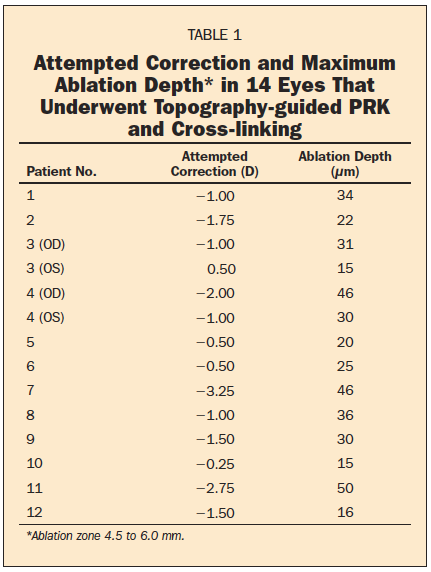 All procedures were performed by the same surgeon (G.D.K.). After topical anesthesia with tetracaine 1% and oxybuprocaine 0.4% eye drops, the epithelium was mechanically removed within an 8.5-mm diameter. A solid-state laser with a wavelength of 213 nm (Pulzar Z1; CustomVis, Perth, Wash) was used for the PRK procedure. The wavelength was generated using a major Nd:YAG laser system of 1064 nm and through special cultivated crystals the 213 nm is used. The customization was performed based on the corneal higher order aberrations. System software allows the use of a percentage of customization from 0% to 100%. Using 0% would be equivalent to a conventional laser treatment and 100% would be equivalent to a full customized treatment. Adjusting this percentage, attempted correction and ablation zone could lower the maximum depth of tissue removed. Maximum ablation depth was 50 μm. Attempted correction and maximum ablation depth are shown in Table 1.
Ribofl avin (0.1% solution 10 mg ribofl avin-5-phosphate in 10 mL dextran-T-500 20% solution) was applied every 3 minutes for approximately 20 minutes until the stroma was completely penetrated and the aqueous was stained yellow (ribofl avin shielding). A commercially available UVA system (UV-X illumination system version 1000; IROC AG, Zurich, Switzerland) was used for UVA irradiation. Before treatment, the intended 3 mW/cm2 surface irradiance (5.4 J/cm2 surface dose after 30 minutes) was calibrated using the UVA meter YK-34UV (Lutron Electronics Co Inc, Coopersburg, Pa), which is supplied with the UV-X device. During treatment, ribofl avin solution was applied every 5 minutes to ensure saturation.
After treatment, a bandage contact lens was applied until the epithelium healed completely, followed by application of fl uorometholone 0.1% eye drops (FML Liquifi lm; Allergan, Irvine, Calif) twice daily for 2 weeks. 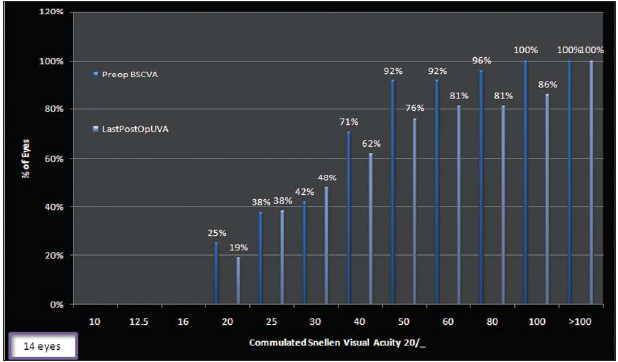 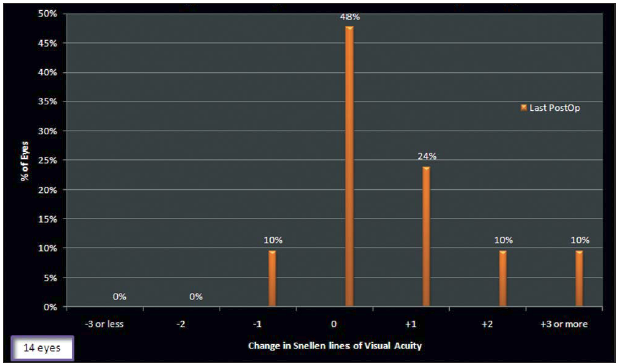 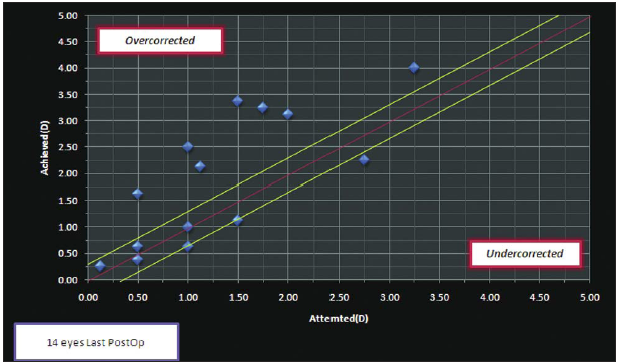 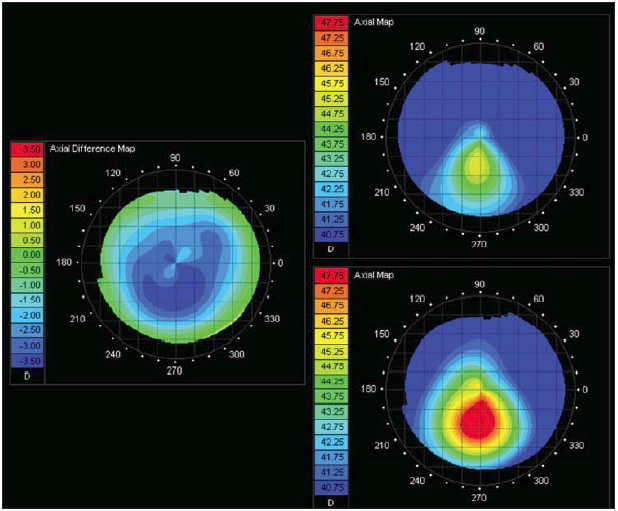 Treatment of keratoconus is an issue consisting of two parameters—corneal biomechanical stability and optical ineffi ciency of the irregular cornea. The goal of our study was to develop a technique to treat keratoconic patients and offer them both stability and functional vision. Reaching functional vision consists of improving UCVA and BSCVA and normalization of corneal topography, which indicates that these patients are less dependent on contact lenses to achieve higher postoperative vision quality.
Stabilization of corneas with ectatic disorders can be achieved with the application of CXL. The method is based on the absorption of UVA radiation by the cornea after the photosensitizer ribofl avin is infused in the stroma.10,11 Despite stabilizing the cornea, the topography and visual performance of patients treated with CXL show minimal improvement.
The application of laser ablation had been introduced formerly for the correction of keratoconus with the main drawback being that it is a tissue removal technique. In stable or forme fruste keratoconus, surface ablation has been reported with promising results. Several studies report the application of excimer laser ablation to correct astigmatism in patients with stable keratoconus. Alpins and Stamatelatos6 report a series of 32 eyes treated with photoastigmatic refractive keratectomy and followed for up to 10 years with no evidence of keratoconic progression. Koller et al7 treated 11 eyes with customized PRK and reported improvement in refractive astigmatism, topography, and quality of vision in all patients.
Twenty-fi ve eyes treated with topography-guided PRK reported by Cennamo et al8 also had improved topographic and visual outcomes.
Given that the CXL procedure is capable of stiffening the cornea and halting keratoconus progression, the combination of laser ablation and CXL provides a potential treatment for keratoconus. Kanellopoulos and Binder9 proposed a two-step procedure with corneal CXL and PRK after a 1-year interval. There are three limitations with this approach. First, the stiffened cross-linked corneal tissue is removed in a second step by the PRK (potentially decreasing the possible benefi ts of CXL). Second, the effi cacy of this approach is limited because the corneal ablation rate could be different in cross-linked corneas than in the virgin cornea (this could lead to unpredictable refractive results). Third, there is an increased possibility of postoperative PRK haze formation (following CXL, the anterior stroma is repopulated by new keratocytes after 6 months).
Due to these aspects, we considered that the best option for treating keratoconus is topography-guided PRK immediately followed by CXL. The main advantage of this technique is that ablation does not interfere with the already cross-linked part of the cornea. On the contrary, cross-linking of the ablated stroma offers the advantage of depopulating keratocytes in the anterior stroma, which could reduce the possibility of haze formation.12
The major consideration in the planning of this procedure was the postoperative corneal thickness. Photorefractive keratectomy was planned based on the patient’s corneal thickness. Restricted treatments of up to 50 μm were performed, whereas the ablation depth was mapped out by modifying the target correction (expected central corneal thickness after PRK and prior to CXL was 40
Patients treated with simultaneous topographyguided PRK with CXL showed a rapid and signifi cant improvement in UCVA and BSCVA. Topographic evaluation of these patients showed marked improvement of irregularity. Even with relatively small correction due to the thickness limitations, patients may benefi t.
Simultaneous PRK followed by CXL seems to be a promising treatment. Performing this technique with careful observance of safety aspects may offer patients with keratoconus the opportunity to gain functional vision, avoid complications of long-term contact lens use, and also reduce the need for corneal transplantation.

Use #MYLASIKLIFE
Your clinic :Hamilton
BOOK A FREE CONSULTATION
EnglishFrançais