Keratoconus is a bilateral, nonsymmetric, noninfl ammatory progressive corneal degeneration that frequently manifests in post-pubescent young adults as progressive steepening attributed to biomechanical stromal collagen weakening. Its incidence has been reported to be 1 in 2000 in the general population.1,2 The increased number among eyes undergoing screening for laser refractive surgery suggests the prevalence may be higher. Current surgical/nonsurgical interventions such as spectacles and contact lenses, intracorneal ring segment implantation,3,4 lamellar keratoplasty, 5 and, the gold standard, penetrating keratoplasty,6 although popular, have limitations.7,8
In recent years, basic laboratory studies and subsequent clinical studies have demonstrated stiffening of the cornea with use of ultraviolet A (UVA) light and ribofl avin solution as a photosensitizer-initiated corneal collagen cross-linking (CXL) with no loss in corneal transparency. The CXL procedure has demonstrated the revolutionary potential for retarding or eliminating the progression of keratoconus and postoperative LASIK ectasia.9-17
We have performed over 1000 CXL treatments in our facility over the past 7 years both for ectasia after LASIK and keratoconus with satisfactory outcomes. We have also demonstrated that topography-guided ablation of the cross-linked corneal stroma can “normalize” the highly irregular corneal surface in these eyes by reducing irregular astigmatism and often reducing the refractive error as well, providing patients with improved visual outcomes.18-21
The clinical results of a novel, same-day, simultaneous approach of topography-guided photorefractive keratectomy (PRK) and CXL for keratoconus22 are presented and retrospectively compared to the data from our previous experience of performing CXL fi rst and PRK at least 6 months later. The outcomes of these two groups are compared in a retrospective case series with follow-up of 2 to 5 years.

All patients were enrolled in our Athens clinical facility. Once a diagnosis of keratoconus was confi rmed (see below), patients were informed of various popular options, including CXL. Being neither FDA-approved nor CE Marked (in cases treated prior to December 2006), informed consent was obtained from all patients and the surgery was performed in the following sequence: CXL fi rst with topography-guided PRK at least 6 months later in eyes treated from August 2003 to May 2005 (sequential group). After gaining signifi cant experience, we shifted our approach to same-day simultaneous customized topography-guided PRK and CXL in eyes treated from June 2005 to May 2008 (simultaneous group).

A diagnosis of progressive keratoconus was made in all patients (all aged 30 years), who developed progressive corneal steepening of at least 1.00 diopter (D) in keratometry, associated with a documented progression of increasing myopia and/or astigmatism over a period of 3 or more months. These fi ndings were in parallel with increasing inferior corneal steepening and thinning to no less than 350 μm after PRK, based on videokeratography and pachymetry. Preoperative clinical data and topography were used as a baseline. Progression of the myopic refractive error with or without progression of the manifest astigmatism, decreasing uncorrected visual acuity (UCVA), loss of best spectacle-corrected visual acuity (BSCVA), progressive inferior corneal steepening on topography, and/or decreasing inferior corneal thickness were fi ndings in all cases.

Each patient underwent manifest refraction before and 30 minutes after administration of one drop of 1% tropicamide solution (Akorn Inc, Lake Forest, Ill), as well as measurement of UCVA and BSCVA that was recorded in a 20-foot lane using high contrast Snellen visual acuity testing and then converted to logMAR scale values. A slit-lamp microscopic examination performed by the author confi rmed invariably in all cases the presence of keratoconus either by the presence of a Fleischer ring, central or paracentral corneal thinning with prominent cornea nerves, and/or Vogt’s striae. Keratometry readings were obtained by videokeratography (Topolyzer; WaveLight Laser Technologie AG, Erlangen, Germany) and by two tomography-based topography devices—Orbscan II (Bausch & Lomb, Rochester, NY) and Pentacam (Oculus Optikgeräte, Wetzlar, Germany). Pachymetry was performed using all of the following instruments: Pentacam, Orbscan II, and ultrasonic EchoScan US-1800 (NIDEK Co Ltd, Gamagori, Japan). The minimal measurement in each case was used as the cornea thickness value, due to the importance of referencing the thinnest point. Specular microscopy was performed using the Konan specular microscope (Konan Medical, Boston, Mass).
Our technique of sequential CXL followed by topography- guided PRK at a later date has been reported previously. 20,21 Both procedures have received a CE Mark for clinical use (CXL in 2006, topography-guided PRK in 2003) within the countries of the European Union, including Greece. Topography-guided ablations with the WaveLight platform and CXL have not received FDA approval to date. As this is a novel approach and may be unfamiliar to most readers, the same-day simultaneous approach of topography-guided PRK and then CXL is described.

We have devised this technique based on the proprietary WaveLight customized platform (Topolyzer). Use of the topography-guided platform with this device to normalize irregular corneas, including those with ectasia, has been reported previously.23-25
This proprietary software utilizes topographic data from the linked topography device (Topolyzer). By default, it permits the consideration of eight topographies (of predetermined threshold accuracy), averages the data, and enables the surgeon to adjust the desired postoperative cornea asphericity (chosen as zero in all cases), the inclusion, or not, of tilt correction (no tilt was chosen in all cases), as well as the adjustment of sphere, cylinder, axis, and treatment zone (an optical zone of 5.5 mm was chosen in all cases). The image of the planned surgery is generated by the laser software.20,21
We used topography-guided PRK to normalize the cornea, by reducing irregular astigmatism and also treating part of the refractive error. To ensure minimal tissue removal, the effective optical zone diameter was decreased to 5.5 mm (compared to our usual treatment diameter in routine PRK and LASIK cases of at least 6.5 mm). The transition zone was 1.5 mm. We also planned ~70% treatment of cylinder and whatever level of sphere (up to 70%), so as not to exceed 50 μm in planned stromal removal. The value of 50 μm waschosen arbitrarily by the author, based on experience with this platform in irregular corneas.
Following the placement of an aspirating lid speculum (Rumex, St Petersburg, Fla), 20% alcohol solution was placed within a 9-mm titanium LASEK trephine (Rumex) for 20 seconds after which the epithelium was wiped with a dry Weck-cell sponge. The laser treatment was then applied. A cellulose sponge soaked in mitomycin C 0.02% solution was applied over the ablated tissue for 20 seconds followed by irrigation with 10 mL of chilled balanced salt solution.

For the next 10 minutes, 0.1% ribofl avin sodium phosphate ophthalmic solution (PriaVision Inc, Menlo Park, Calif) was applied topically every 2 minutes. The solution appeared to “soak” into the corneal stroma rapidly, as it was centrally devoid of Bowman’s layer. Following the initial ribofl avin administration, four diodes, emitting UVA light of approximately 370 nm wavelength (365 to 375 nm) and 3 mW/cm2 radiance at 2.5 cm was projected onto the surface of the cornea for 30 minutes. A “Keracure” prototype device was used (Priavision). The Keracure device has a built-in beeper that alerts the clinician every 2 minutes during the 30-minute treatment to install the ribofl avin solution in a timely fashion. A bandage contact lens was placed on the cornea at the completion of the procedure.
After CXL, topical ofl oxacin (Allergan Inc, Irvine, Calif) was used four times a day for the fi rst 10 days and prednisolone acetate 1% (Pred Forte, Allergan) was used four times a day for 60 days. Protection from all natural light with sunglasses was encouraged along with oral Vitamin C 1000 mg daily for 60 days postoperatively (our standard postoperative management following PRK). The bandage contact lens was removed at approximately day 5 following complete reepithelialization.
All cases were evaluated before and after both treatments for age, sex, UCVA, BSCVA, refraction, keratometry (K), topography, central corneal thickness (CCT), endothelial cell count, corneal haze on a scale 0 to 4 (0=clear cornea, 1=mild haze, 2=moderate haze, 3=severe haze, and 4=reticular haze [obstructing iris anatomy]), and ectasia stability. These parameters were retrospectively collected and then statistically analyzed using paired t test.

Figure 1. Representative corneal topographies from sequential Pentacam examinations are shown in a 29-year-old patient from the simultaneous group (same-day, simultaneous topography-guided photorefractive keratectomy [PRK] and corneal collagen cross-linking [CXL]). The difference map (right topography) is shown for the changes from preoperative (left topography) to 2 years postoperative (middle topography). The Pentacam data demonstrate the change of keratometric data from 49 and 44.3 @ 60.9° to 44 and 41.8 @ 46°. Changes in visual acuity and refraction data from pre- to postoperative were: uncorrected visual acuity 20/100 to 20/25 and best spectacle-corrected visual acuity (BSCVA) 20/30 with 2.75 3.50 @ 65 to BSCVA 20/20 with 0.50 1.00 @ 35 at 2 years. The difference map illustrates the surface change achieved by the simultaneous topography-guided PRK and CXL technique, which resembles a combined myopic PRK over the cone apex and an asymmetric hyperopic PRK in the periphery.

Questions such as “How much ectasia?” and “What types of ectasia can we safely and predictably correct?” as well as “Is there a minimum preoperative CXL corneal thickness that will not respond to the procedure?” require further investigation. Strategies need to be developed to determine the attempted correction and ablation depth for the topography-guided PRK portion of this process. The proper concentration of ribofl avin, its delivery within the corneal stroma, and the proper UVA light exposure and duration will need to be adjusted as we move from animal model studies into clinical procedures. Perhaps CXL will have a wider application as prophylaxis in laser refractive surgery, as we reported in PRK30and LASIK.31
Our findings suggest better results with same-day, simultaneous topography-guided PRK and collagen CXL, as a therapeutic intervention in highly irregular corneas with progressive keratoconus. Our goal was to stabilize the ectasia (with CXL) and rehabilitate the vision (with topography-guided PRK) in young adults with advancing keratoconus to delay or even avoid corneal transplantation. Larger, prospective and randomized, comparative studies, establishing the safety and effi cacy of this treatment, and longer follow-up, are necessary to further validate these results. 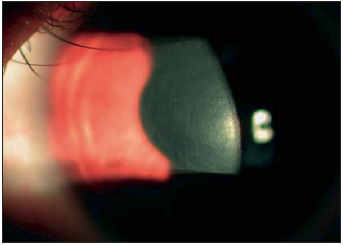 Use #MYLASIKLIFE
Your clinic :Hamilton
BOOK A FREE CONSULTATION
EnglishFrançais