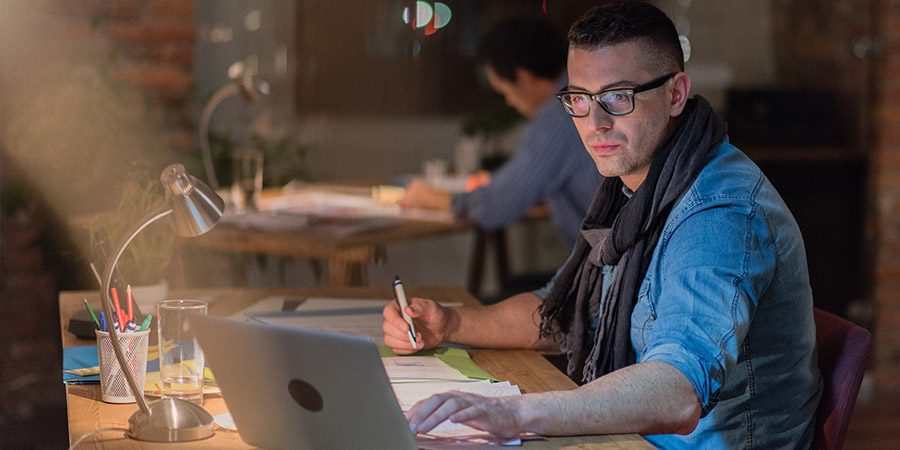 The Benefits of Blue Light Blocking Glasses in Protecting Your Eyes

Blue light blocking glasses have emerged as a promising way to protect our eyes from digital eye strain. People are spending more time in front of screens than ever before, as many adjust to remote learning or working from home. But overexposure to digital devices has been linked to a myriad of health problems, both long and short term. This begs the question of how blue light blocking glasses promise to work in order to reduce the effects of digital eye strain, and even more, whether they’re actually worth the investment.

The visible light spectrum – the portion of the electromagnetic spectrum that is visible to the human eye – consists of a range of colours. Light on the higher end of the spectrum is red and has the longest wavelength. Conversely, light on the lowest end of the visible spectrum is blue-violet and has shorter wavelengths. Shorter wavelengths tend to emit more energy. This is known as blue light or High Energy Visible (HEV) light. As its name suggests, it’s also the light that promises to be filtered by blue light blocking glasses.

Sun light is the main source of blue light. The dangers of sun exposure are well-known, which has popularized protective measures like sunglasses and sunscreen. What is less commonly known is that screens from digital devices, such as televisions, phones, computers, and tablets, also emit a blue light, albeit it is an unnatural one. Though the blue light emitted by electronic devices is very small in comparison to the blue light emitted from the sun, the frequency and duration for which we use digital devices has caused concern regarding its long-term impact on our overall eye health.

Blue light blocking glasses promise to help reduce the effects of prolonged exposure to blue light in the following ways:

Blue light is essential to our sleep cycle. It naturally regulates our circadian rhythm, the natural, internal process that controls the sleep-wake cycle. In the mornings, blue light emitted by the sun helps to naturally wake us up and increase our energy levels. At night, the lack of exposure to blue light via the sun signals to the body to produce melatonin in preparation for sleep.

However, when we’re exposed to unnatural blue light at night (such as by checking our texts or emails before going to sleep), it sends mixed signals to the body. The influx of blue light tells the body it’s not time to sleep, thereby interfering with the production of melatonin and making it harder to fall asleep or have a good night’s rest. This is why research cautions against looking at screens directly before settling in for the night.

By promising to obstruct blue light, even only partially, blue light blocking glasses claim to help prevent the circadian rhythm from being disrupted, thus encouraging a better night’s sleep.

They Claim To Reduce Eye Strain

Eyestrain is a common condition that happens when a person’s eyes get tired after intense or concentrated use. It’s most commonly associated with staring at computer screens or other digital devices for an extended period of time. It’s characterized by a myriad of uncomfortable symptoms, including sore, itchy, dry or watery eyes, headaches, sore neck and shoulders, increased sensitivity to light, and difficulty concentrating. These may get worse over time. It also makes a person more prone to long-term consequences, such as eye diseases.

The problem is that the eye’s cornea and lens can’t filter out all of the blue light before it reaches the retina. This, in turn, can cause damage to the light-receiving cells that line the retina tissue in the back of the eye. It’s actually harder for the cornea and lens to filter blue light because of its shorter wavelength, which scatters in the eye, lowers contrast, and makes it harder to focus.

Blue light blocking glasses, however, promise to do what the cornea and lens cannot – filter out blue light before it reaches the retina. This has the potential to not only reduce the discomfort of short-term symptoms of digital eye strain, but it also stands to protect your eye health in the long run.

They May Help You Work Longer

People are relying on digital devices more than ever in the current climate in order to facilitate working and learning from home. But as we spend more time in front of screens, digital eye strain becomes more likely. Uncomfortable symptoms such as sore or itchy eyes, painful posture, and headaches can greatly hinder our ability to complete our work in an efficient fashion.

However, by acting as a preventative measure to stop these symptoms from developing in the first place, blue light blocking glasses promise to offer us the freedom to work more comfortably and for longer periods of time. If this holds true, it may give you more freedom to create a work or school schedule that works for you and isn’t impeded by the consequences of digital eye strain.

Blue Light Blocking Glasses: Are They Worth The Investment?

As such, although various sources, including manufacturer and consumer reviews, say blue light blocking glasses work wonders in protecting your eyes, some experts have been reluctant to fully endorse their benefits amid minimal research. For example, both the American Academy of Ophthalmology and the College of Optometrists warn that the scientific evidence available does not necessarily suggest blue light blocking glasses have wide-spread benefits. The AAO specifically states there is “no scientific evidence that the light coming from computer screens is damaging to the eyes.” As such, more research is needed not only to look into the benefits of lack thereof of blue light blocking glasses, but also the impact of digital blue light on our vision.

While the research on blue light blocking glasses remains indecisive, there are other tried-and-tested methods to reduce digital eye strain. These include:

More research is needed to affirm the benefits of blue light blocking glasses in preserving our eye health. However, the aforementioned tips can work wonders in protecting your eyes into the future. To learn more about all things vision, including how LASIK eye surgery may provide a long-term solution to your eyesight problems, be sure to visit our blog.