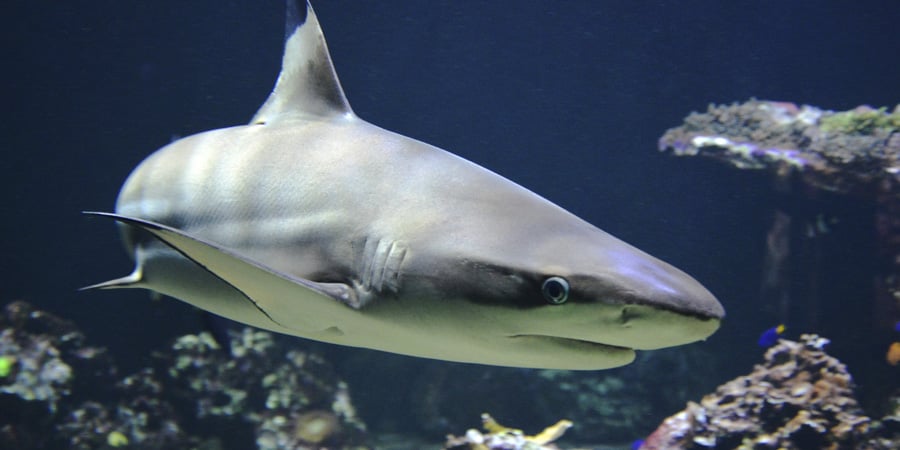 Sharks Found to Have Human-like Vision

The majority of fish have eyes similar to those of mammals and birds, but how certain groups of fish—like sharks—use this vision has often puzzled scientists.

Sharks have retinas, corneas and lenses just like other vertebrates. The sharks’ retina has rod cells which gives them good vision in low light conditions, and unlike most fish, sharks also have the ability to contract and dilate their pupils.

On the other hand, sharks’ eyes are small relative to their head, and their eyes are placed further back towards their neck—limiting their field of vision. For these reasons, researchers have long debated how much sharks use their vision when “looking” for prey.

This is because sharks possess an incredible sixth sense: electroreception. Sharks have special pores around their faces which detect electrical currents emitted by other fish or organisms. Scientists have long believed that their visual limitations combined with their finely tuned electroreception abilities meant that they didn’t need to rely on their vision to hunt.

Researchers from the University of Western Australia have discovered new clues which suggest that vision may be more important to sharks than previously thought. The team of scientists studied the brains of over 150 shark species, looking at a portion of the brain called the optic tectum.

Known as the brain’s visual reflex centre, the optic tectum is largely responsible for the body’s behavior in relation to visible objects. Essentially, the optic tectum “tells” vertebrate animals to move based on what they see.

The scientists found that this portion of the brain is large in sharks, similar in relative size to that of humans. Typically, a larger optic tectum is associated with an increased reliance on vision.

One major use for this information will be in preventing shark attacks. In Australia, electrical pulses and chemicals are used to deter sharks from beaches where people swim and surf. Unfortunately, these methods don’t repel sharks in all cases.

The research team from the University of Western Australia now believes that visual deterrents could be a more effective way to deter sharks. They say it could be as simple as painting the markings of a poisonous snake—which sharks recognize and avoid–on surfboards and wetsuits.