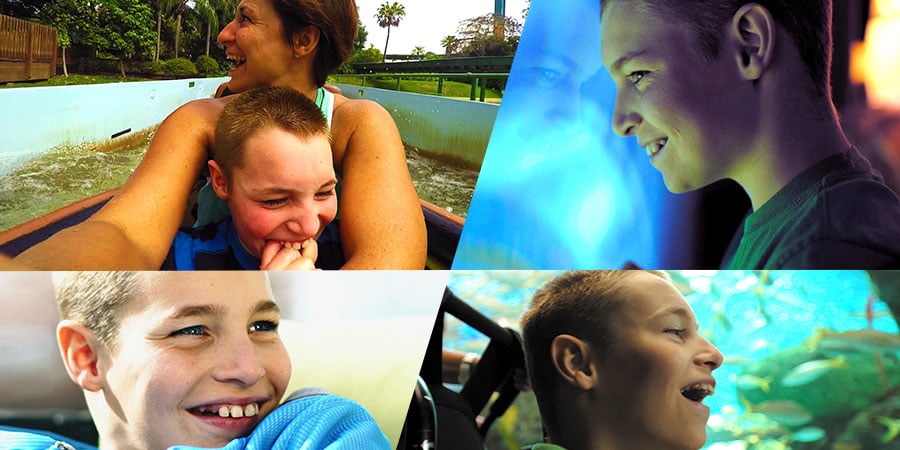 Meet Callum & Read All About his Special Journey

What you’re about to read is the story of a young boy named Callum Blackburn. He’s a playful, energetic 11-year old who loves having a good time with his family: mom Heidi and sister Keira always know how to make Callum smile. What sets Callum apart, though, is that he was born with a condition known as Angelman Syndrome. Recently, doctors discovered that Callum had trouble with his eyesight—he was nearsighted, which means seeing far distances was quite difficult. So, his family sought care from the SickKids® Hospital in Toronto, Ontario, to help correct his vision. Today, Callum can see the world around him and he is as happy as ever. Keep reading to learn more about this fun-loving child, his family—and his very special journey.

A year after Callum was born, his parents received some life-changing news: Callum had a disease known as Angelman Syndrome, named after the British paediatrician who discovered it, Harry Angelman. It’s estimated that Angelman Syndrome can affect approximately one in every 15,000 births. Often characterized by developmental delays, a lack of functional speech, sleep disturbances, and an abnormal alignment of the eyes. This rare, genetic disorder also interferes with the individual’s balance and can trigger seizures.

When a child is diagnosed with Angelman Syndrome, parents learn quickly that their lives will forever be altered. Callum’s family realized that when it came to their son, day-to-day living was going to be anything but conventional. That meant routine visits from doctors and caregivers or frequent trips to medical centres. Plus, Callum’s condition means he doesn’t always sleep through the night—as a result, his parents stay awake with him. Given Callum’s tendencies to experience seizures, he requires constant companionship to ensure his total safety at all times of the day.

But, in spite of it all, Callum and his family don’t let Angelman’s Syndrome get in the way of living their life to the fullest. In fact, his parents say that their son has taught them so much about patience, unconditional love and much more. His mother Heidi says it best: “Callum has Angelman Syndrome, but [that] doesn’t define [who he is].”

Just like other kids, Callum loves playing games on the iPad (he’s a big fan of Angry Birds); some of his favourite movies include “Star Wars” and “Despicable Me”. During the summertime, Callum stays active—he enjoys everything from swimming, skiing, biking, horseback riding and sailing. He’s also a huge roller coaster buff, and loves hopping on board some of Canada’s Wonderland’s biggest. The easiest way for Callum to communicate is with his eyes—eye contact, as it turns out, is a huge tool of expression. His eyes communicate his needs.

During a routine eye check-up in 2015, doctors noticed that Callum was having trouble seeing far distances.  Doctors determined that Callum was only able to see up to two feet ahead of him. Children suffering from such a condition often can’t wear glasses or contact lenses, leaving only one solution to the problem: laser vision correction.  Thanks to a recent excimer laser donation from LASIK MD, the SickKids® hospital has begun offering laser vision correction to exceptional children, such as Callum.

And so, Callum was deemed a candidate for the procedure, and in May 2016, received the treatment. Almost immediately after his surgery, he was able to see the world with greater clarity—a change that his mother said she noticed right away. “He’s interested in everything that’s around him. It’s opening up his world. It’s been life-changing” says Heidi.  On a recent trip to Ripleys Aquarium in downtown Toronto, Callum couldn’t stop appreciating all of the vibrant, bright colours on the different sea creatures he saw.

Many children—like Callum—turn to institutions like SickKids® for their care. The hospital is recognized as one of the world’s foremost paediatric healthcare institutions, and is Canada’s leading centre dedicated to advancing children’s health through the integration of patient care, research, and education. Their partnership with LASIK MD is just one example of how, at SickKids®, children come first.

Find out more about some of their exciting initiatives by following them on Twitter at @SickKidsNews or by visiting their website at www.sickkids.ca.