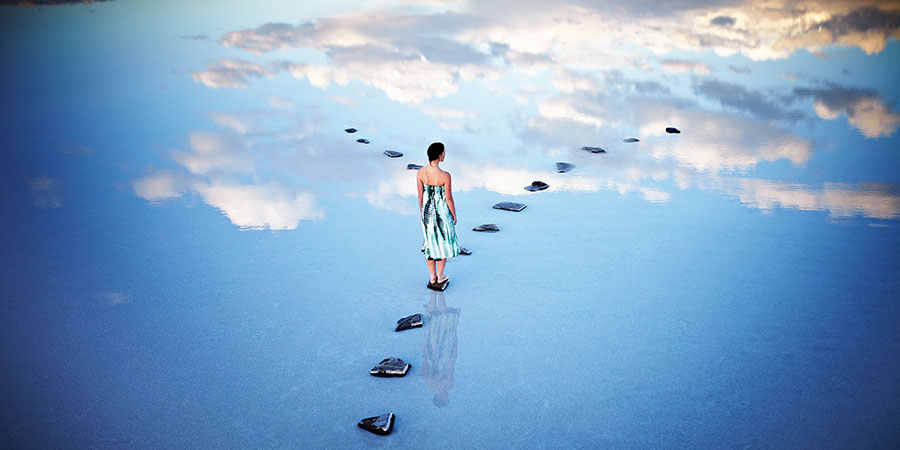 How we see in our dreams

Every night, we experience an average of four to seven dreams – even if we have no memory of them. Usually lasting anywhere from a few minutes to around half an hour, we dream for one to two hours total per night. Curious about how and what we see in our dreams? Read on!

We go through five stages of sleep each night. REM sleep is the fifth, final, and deepest state of sleep that we experience and is characterized by rapid eye movements (or REMs). During this phase, our brain activity is at the same level, or higher, than when we are awake, and it is the most common phase of dreaming. Furthermore, research shows that brain activity during REM sleep is very similar to brain activity that processes visual cues when we’re awake. This means that the movements our eyes make during REM state correspond to what we see in our dreams. Interestingly, another study confirmed this by looking at individuals capable of lucid dreaming (a state in which a dreamer knows they’re dreaming). Participants were told to squeeze their fists in a specific sequence in their dreams and researchers were able to see corresponding eye movements at the exact time that said fists were squeezed.

REM sleep is the fifth, final, and deepest state of sleep that we experience and is characterized by rapid eye movements (or REMs).

What can we see in our dreams?

Dream theory continues to perplex and divide researchers. In an effort to better understand them, there have been attempts to record dream content – with some accuracy. Yes, that means that in the future, we may be able to have “movies” of our dreams.

What we do know about the mechanics of dreaming is that neurons fire in the primary visual cortex of the brain and those are what allows us to “see” things in our dreams.

You may have consulted dream “dictionaries” in order to decipher the objects or people you see in your dreams. Dreams can be complex and are usually symbolic of feelings, and rarely representative of literal people or events.

Some reports have shown that in younger people who have only ever been exposed to colour media (such as television), the majority of their dream content was in colour, as opposed to older people who experienced black and white dreams more frequently.

What about dreams in which your vision appears blurry? Unless you’ve recently had a change in your vision in waking life, dreams with blurry vision often represent feelings of confusion or refusing to “see” or accept a situation for that it is. Although cryptic, it can always be interesting to try to understand what a dream could be trying to tell you in order to get clarity about a solution to a waking-life problem.

What we do know about the mechanics of dreaming is that neurons fire in the primary visual cortex of the brain and those are what allows us to “see” things in our dreams.

Do blind people see in their dreams?

It’s widely accepted that people who become blind later in life see visual content in their dreams since they already know what certain things look like. However, even congenitally blind people have visual content in their dreams and have been shown to be able to draw what they saw. Although it is sometimes believed that this is not possible (how can you see something in a dream if you have never seen it before?), several studies seem to support the theory.

For one, a study on human fetuses showed that their eye movements corresponded with activity in the visual and frontal areas in the brain, suggesting that our visual system is active even before we’re born. Furthermore, a study on congenitally blind people showed that while they did have fewer rapid eye movements during the night, they had the same rate of dream recall, vividness of dreams and quantity of visual content reported as sighted patients.

It seems that while dreaming, the brain has the ability to conjure up experiences that it may not have ever had in waking life. Similarly, other studies have shown that people born with hearing loss or paraplegia have had dreams where they are speaking and can hear others, as well as of walking and running.

Congenitally blind people do, however, seem to have dreams with more heightened senses of smell, touch, and taste.

It seems that while dreaming, the brain has the ability to conjure up experiences that it may not have ever had in waking life.

The purpose of dreams

Although not conclusive, theories suggest that REM sleep helps us to form and store memories, as well as to learn by regulating neuronal synapses. Other theories about the purpose of dreams is that they help us interpret events from waking life, problem-solve, and help us work through emotions.

If you have questions about your vision in waking life and would like more information on the vision correction procedures we offer, download our Free Info Kit today!