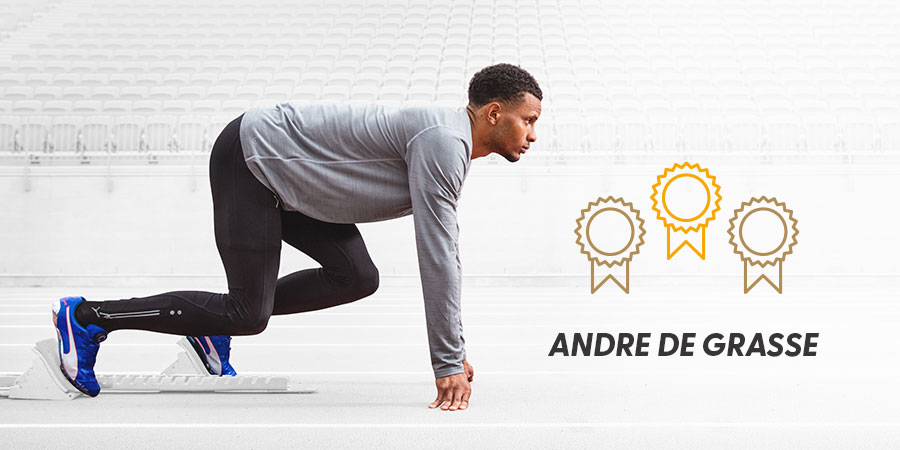 LASIK eye surgery makes it easier to achieve your goals, and no one knows that better than Andre De Grasse. The Canadian sprinter used to struggle with blurry vision, but he opted to undergo a vision correction procedure with LASIK MD. Since then, Andre has been able to focus on becoming the fastest man in the world without the inconveniences of glasses and contact lenses holding him back.

Below, we discuss how LASIK MD has been a part of Andre’s journey to success, and how laser eye surgery can simplify your life.

Who Is Andre De Grasse?

Born and raised in Scarborough, Ontario, Andre De Grasse has become a well-known Canadian sprinter. He was discovered by a coach when he ran his first race at York University in his last year of high school at the age of 17.

Since then, Andre has won six Olympic medals during his athletic career. In fact, he broke a record when he became the first Canadian sprinter to win three medals in a single Olympics competition. Andre earned a silver medal in the 200 m as well as bronze in both the 100 m and 4x100 m relay during the 2016 Summer Olympics in Rio de Janeiro. Most recently, Andre took home bronze medals in both the 100 m and 4x100 m as well as a gold medal in the 200 m at the 2021 Summer Olympics, held in Tokyo.

How LASIK Set Andre Up for Success

When you’re an athlete, speed and strength aren’t the only main factors affecting your performance. Your vision plays a big part, too. It controls your spatial perception as well as localization, and therefore your accuracy.

Speaking to LASIK MD, Andre emphasized how important precision is when competing in a sport such as sprinting. “The 100 m is one of the toughest races, I believe,” he explained. “In one blink of an eye, you can miss a step and the race can be over. Every little detail counts. That’s where that precision comes into place.”

Andre started to notice that his vision was deteriorating. “My vision over time was getting worse,” the athlete explained.

While glasses and contacts lenses could’ve helped him see clearly, they come with major inconveniences, especially when training for a sport like running. For example, when sprinting down a racetrack with glasses, there’s a risk they could fall off or become foggy as you sweat. Similarly, training with contacts can become irritating if you experience dry eye. There’s also a risk that dirt or other particles can get in the way and obstruct your view.

After LASIK, however, Andre no longer has to worry about wearing glasses or contacts during a race or while training. Now he’s able to focus all of his energy and attention into his performance.

When you’re a serious athlete, countless hours go into training. This cannot be understated when preparing for competitions at a global level. So, for Andre, it wasn’t an option to take an extended period of time off from his training. But this is why LASIK was an excellent option for him.

LASIK eye surgery is one of the quickest elective medical procedures available. Most people experience results immediately after their surgery, and even more, are back to their normal routines within only 24-hours of the procedure. In many cases, there’s no need to take time off work.

The procedure itself is quick, too. The surgery lasts approximately 15 minutes, while the laser is used for less than 10 seconds per eye.

The quick recovery time is one of the many reasons Andre De Grasse chose to undergo vision correction surgery with LASIK MD. He was able to get back to the track with his new, clear vision in no time, so the procedure and recovery didn’t interfere with his training schedule.

"After I had the procedure, I started back my training," Andre explained. "But when I step into the blocks, I felt like I had no problems just being able to have that perfection and be able to execute the race perfectly. Now, I can be fearless."

Andre went on to emphasize how clear vision is helping him achieve his professional and personal goals.

“Having that perfect vision is going to help me become a world champion,” he said. “I know that, moving forward, I have to continue to keep working hard and be motivated, so that one day I can be the fastest man in the world. That’s my LASIK life.”

You don’t have to be an elite athlete to enjoy the many benefits of clear vision. LASIK eye surgery helps simplify your life by offering you freedom from glasses and contacts, which makes it easier to achieve your goals. It can even save you money in the long run by eliminating expenses associated with frames and contacts. Whether you’re sprinting towards the finish line or going for a jog around the block, LASIK gives you freedom to focus on the things that really matter.

Are you interested in learning more about how LASIK eye surgery or another vision procedure can transform your life?