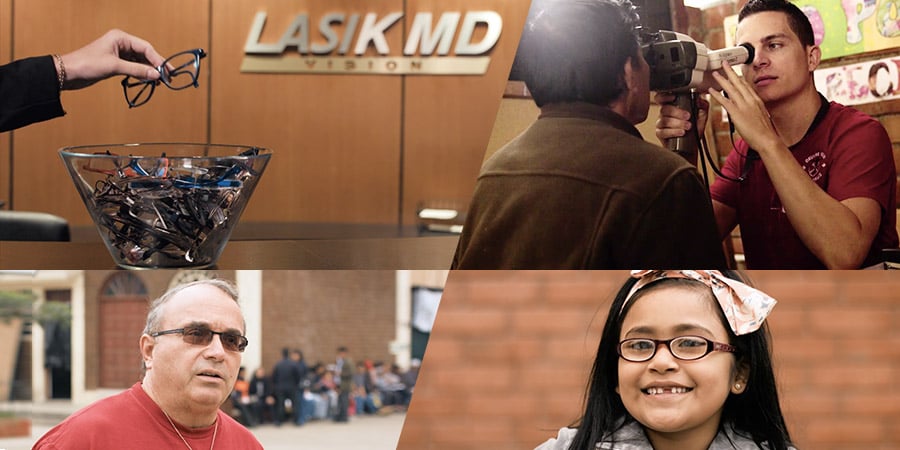 How gifting your glasses can help strangers halfway across the globe

LASIK—it’s the kind of life-changing step that has a huge impact on so many of our patient’s lives. They know that by making the decision to get laser eye surgery, they’re choosing an exciting path, one that removes the inconveniences of wearing glasses or contacts, and welcomes a whole new freedom into their lives. So, before they gear up for their glasses-free living, there’s one stop that we encourage all of our patients to make. Located beside LASIK MD’s reception desk sits a donation container that holds the pairs of glasses that people no longer need after their surgery. But where these frames wind up next will inspire you to give your glasses a second life. Learn more about where these glasses end up, and how by donating your glasses after LASIK, you can help change someone’s life.

The numbers released by the World Health Organization tell an alarming story: a staggering 90% of the world’s visually impaired populations live in low-income settings. On a global scale, the WHO also found that untreated refractive errors were the main cause of moderate to severe visual impairment.

In spite of these facts, there is hope: The WHO reports that 80% of these visual impairments can be prevented or cured. This is good news for humanitarian organizations like VOSH International (VOSH stands for Volunteer Optometric Services to Humanity).

VOSH, whose stated mission is to “bring clear vision to every person on the planet and to help improve the quality of these peoples’ lives through better vision”, works with global community leaders like Lions Club International to collect glasses and redistribute them to communities in need.

With enough donations, VOSH’s team then sends its volunteers to set-up “pop-up” eye clinics in developing communities for several weeks at a time. These clinics test locals for refractive errors like myopia, hyperopia, presbyopia, and astigmatism, all of which can be treated by the VOSH volunteers.

VOSH’s Montreal branch, called VOSH Santa Cruz, is managed by Father Pierre Labine, a man who is passionate about providing the gift of sight to those in need. VOSH Santa Cruz is located in a 4,000 sq. ft. warehouse, giving Father Labine and his team of almost 100 volunteers plenty of room to sort through the number of glasses they receive—which, as it turns out, is a lot. Since 1999, VOSH Santa Cruz estimates the mission has worked with more than 200,000 patients in eight countries at some 54 different missions. The volunteers who spend their time in the mission are largely made up of eye care professionals, optometrists, and OD students.

For many of these communities, the volunteer work can be game-changing; VOSH says that roughly 2.5 billion people worldwide live with impaired vision, and of those who have a clinical need, 1.1 billion (approximately one in every seven persons) lack access to glasses and vision care in general. These numbers are upsetting to Father Labine. Since participating in numerous missions, he has vowed to do his part to increase access to vision care everywhere in the world.

“The eyes are not only the windows to the soul,” Father Labine says. “They’re also the window to the world around us. We sometimes seem to take [eye care] for granted, but the people [VOSH helps] really appreciate what we do because it changes their lives.”

Where VOSH gets the glasses

In order to meet the goals of these eye care missions, VOSH partners with different organizations to collect glasses generously donated by people who no longer need them.

Companies just like LASIK MD offer patients the opportunity to give their glasses away after they’ve had a vision correction procedure. Each year, LASIK MD patients donate tens of thousands of eyeglasses courtesy of this in-clinic initiative.

VOSH says its success in organizing eye care clinics is owed in part to the generosity of people who are ready to let go of their glasses.

“If it wasn’t for the companies and organizations like LASIK MD gathering up the glasses, we wouldn’t be able to do these eye missions,” says Father Labine.

Such donations mean VOSH International is able to help a greater number of communities, making access to eye care much easier to come by.

In order to get the boxes and boxes of glasses to the volunteer clinics, LASIK MD ships large quantities gathered from across the country to VOSH’s Montreal mission. There, Father Labine and the dedicated team sort through what they’ve received.

VOSH typically receives a variety of styles and prescription glasses, which means that there are are many options for people to choose from that are tailored to their specific vision requirements. Using special technology, the volunteers analyze the many pairs of glasses received: They measure the prescription and quality of each pair. They sort through the donations to determine whether a given style is intended for men, women, or children. The boxes are then labelled, and are shipped to different countries.

A recent excursion abroad to Lima, Peru, showcases the success of such efforts. Father Labine and his team set up their eye care clinic there, where the VOSH volunteer team were able to meet with approximately 400 people each day. During their stay in Lima, volunteers conducted eye exams and diagnostic testing as well as fittings in an effort to find each and every person just the right pair of glasses for their prescriptions—and tastes. By the time their mission concluded, some 2,800 people benefited from improved vision, meaning that so many more people were able to benefit from the chance to read books, take on new work opportunities, and see the world around with fresh perspective.

One optometrist, Dr. Marie-Andrée Morin, who joined the team on this mission, said that her reason for participating in these initiatives is largely because the advent of eye care isn’t as commonplace in these developing countries as it is in other parts of the world.

“[When we come here], we’re seeing patients who probably never had an eye exam before.” she continues. “So everyone who comes in will have a full eye exam to make sure their health is okay.”

The gift of glasses

As an organization, LASIK MD is thrilled to be able to partner with non-profits, spreading the gift of sight to developing nations. We encourage all of our patients to stop by one of our clinics to bring in an old pair of glasses (and help yourself to a coffee or cookie in our clinic while you’re at it).

Or, seek out any Lions Club or VOSH International collection drives happening in your area. Because a simple gesture like dropping off a pair glasses into LASIK MD’s collection bin is one small step you can take to help change a life.