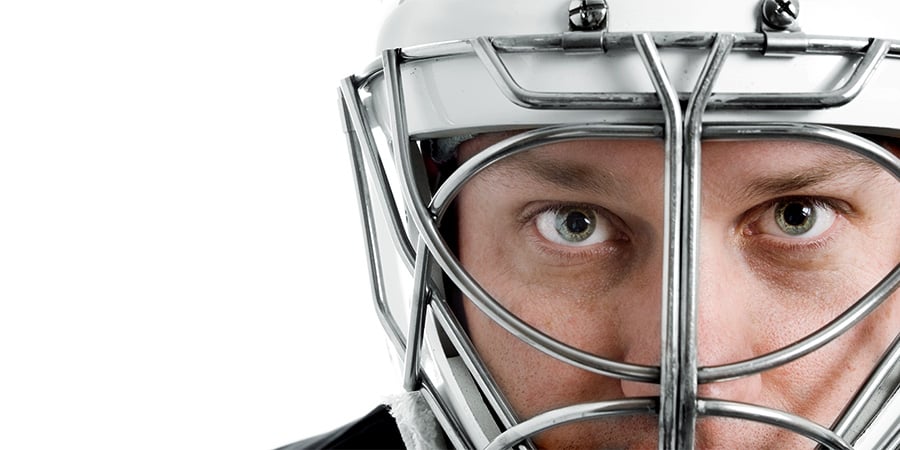 Eye Protection in Sports: The Evolution of the Hockey Goalie Mask

Eye protection in sports is extremely important. For goalies in the sport of hockey, where brave goaltenders face a veritable fusillade of slapshots and one-timers, eye protection is especially important. Rubber pucks traveling upwards of 100 miles per hour elevate off the surface of the ice and fly towards the faces of these goalies. Given the obvious potential for injury, it is a must that they protect their faces and eyes with the most state-of-the-art protective equipment. The goalie mask has come a long way in the past 60 years. Like eye protection in sports such as football and baseball, there has been a dramatic progression in how masks and helmets protect goalies in ice hockey.

The evolution of the hockey goalie mask supposedly all started when Montreal Canadiens star goalie, Jacques Plante, created a homemade mask to wear in games after taking a puck to the face. Reportedly, Plante was initially the object of much ridicule for his decision to wear the mask, even getting some guff about it from his own head coach, Hector “Toe” Blake. But this derision quickly turned to praise after the Canadiens won their next 18 games, perhaps due to the newfound sense of security experienced by Plante in net.

The humble beginnings of Plante’s homemade “Jason” mask soon evolved into a protective item that covered goalies’ entire faces. The ’70s were also the period when many goalies started to really individualize their masks with elaborately painted, distinctive designs. Detroit Red Wings’ goalie Jim Rutherford is allegedly one of the first to add paint to his mask.  Gerry Cheevers’ “Stitches mask” and Ken Dryden’s target design from this period are among some of the more memorable masks in hockey history.

The late ’80s and early ’90s saw the creation and widespread use of the combo goalie mask: a full shell that covered the goalies’ heads with a small cage allowing for greater visibility.  Despite the trend, some continued using the helmet/cage combo first introduced by an emerging international star, Russian goalie Vladislav Tretiak, in the early 1980s.

The goalie mask of today incorporates the combo design of the 1990s, with lighter and more impact-resistant materials, such as Kevlar webbing and fiberglass inserts, to more fully protect today’s top-of-the-line netminders. Additionally, the employment of titanium alloy cages significantly decreases the weight of the mask while adding protection to the eyes, mouth, teeth, and cheekbones. Thus, it’s really no wonder why goalies are often some of the best-looking guys on their teams!

Of course, just as hockey goalies needed to find a way to protect their eyes from the inherent dangers of the sport, and just as eye protection in sports continues to evolve, us everyday sports fans now also have the resources not only to protect our eyes, but to have them see with the vision of a Bobby Orr or Hull.