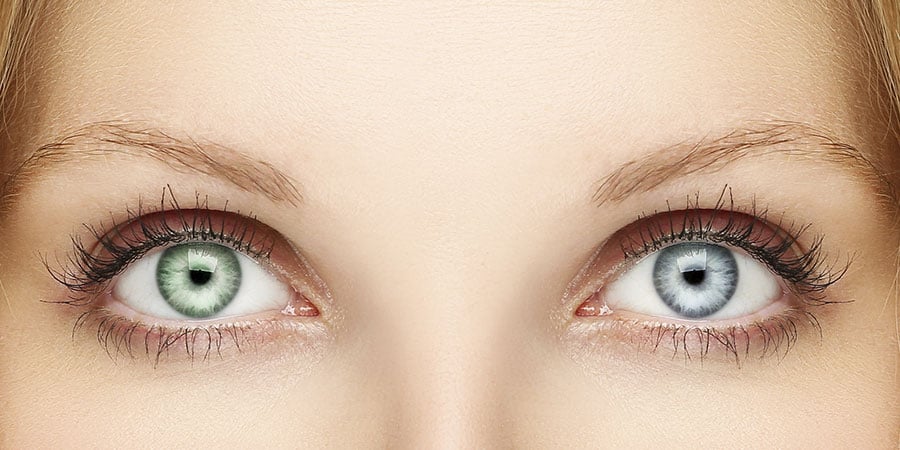 Did you know that David Bowie, Kate Bosworth, Christopher Walken, and Canada’s own Dan Aykroyd have different colour eyes? Well, as many embarrassed boyfriends know when pressed to hazard a guess as to whether their significant other’s eyes are green or blue, unless you get a close-up view, it is often difficult to determine the colour of another’s eyes.

To gain an understanding of heterochromia, it helps to first have an understanding of what constitutes eye colour. Eye colour is generally the result of how much pigment a person has in the front part of the eye, called the iris. Zero or slight pigment gives blue eyes, moderate pigment results in green, and a great deal of pigment bestows brown eyes. The respective amount of pigment in a person’s eyes is dependent on the genes contained in special cells named melanocytes.

As such, if someone you know has heterochromia, this is likely because a melanocyte has only found its way into one of their eyes. If a melanocyte does not arrive to the other eye, that eye will be blue due to the absence of pigment. While there is no one particular determining factor regarding whether melanocytes will arrive in one’s eyes during infant development to give the eyes colour, an injury during development can cause them to die off. Waardenburg syndrome is a genetic disorder that can also affect the pigmentation in one’s eyes or hair, affecting both humans and animals.

Two other ways in which a person can have different colour eyes are mosaicism and chimerism. Mosaics and chimeras are humans or animals that have more than one genetically-distinct population of cells.  In mosaics, the genetically different cell types all arise from a single zygote, or fertilized egg, whereas chimeras originate from more than one zygote. A chimera can have two different coloured eyes just like any two siblings can—because each cell has different eye colour genes. A mosaic can have two different coloured eyes if the DNA difference happens to be in an eye colour gene.

These are just a few of the reasons why individuals have different colour eyes. For example, David Bowie’s different colour eyes come from an injury that causes one pupil to be permanently dilated. Viral infection or serious disease can also affect one eye’s hue, but not the other’s. As scientists and geneticists learn more about heterochromia and these related conditions, we will be able to learn even more.

While more concerned with correcting the integral components of vision as opposed to eye colour, the trusted experts at LASIK MD will help you see your significant other’s baby blues, emerald greens, doe browns, or mystic hazels with amazing acuity.