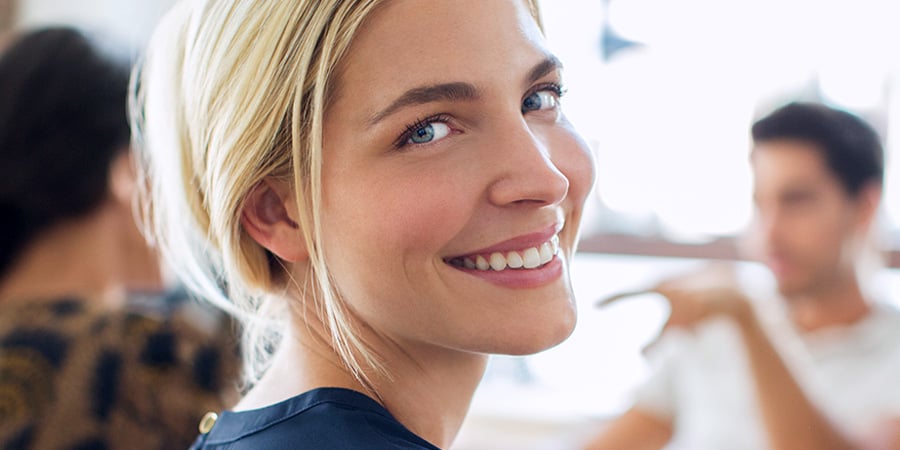 According to a long-term research study from the University of Copenhagen, it’s likely that anyone with blue eyes shares a common ancestor. While variation in human eye colour is caused by at least 15 separate genes, mutation in a single gene produces blue, and can be traced to a specific DNA location. So while the link may be distant, any two people with blue-coloured eyes are actually relatives. There’s some data to suggest that those with lighter-coloured eyes are at greater risk for ocular issues—but does hue really impact vision or long-term eye health?

Blue colour in the eyes was originally thought to be a simple, recessive gene—it’s extremely uncommon in Southeast Asia, Africa, and Japan, for example—but in fact it is the result of a mutation in one specific gene: OCA2. The OCA2 gene produces melanin, which is the pigment responsible for hair, skin, and eye colour. In blue-eyed individuals, OCA2 has mutated in such a way that melanin production in the iris is limited, changing the natural colour of eyes from brown to blue. Professor Eiberg, lead researcher of the Copenhagen team, describes the mutation as a “switch.” Anyone with this switch in their DNA, moreover, has a very specific reduction in melanin levels, while those without the OCA2 switch have wide variations of melanin content in their eyes. Eiberg therefore concluded that the blue-eyed gene came from a single point: a common ancestor anyone with blue eyes can claim.

It’s also worth noting that eye colour is partially a result of environmental factors, thanks to a process known as Rayleigh scattering. This scatter effect is also responsible for the blue colour of the sky, and it occurs when tiny particles in the fluid of your eyes scatter light across the iris, causing colour variations. This effect is more noticeable in those with light-coloured eyes and is the reason their eyes seem to lighten or darken based on the weather.

While there’s no research to support that any one eye colour means better—or worse—sight, those with blue eyes are at greater risk for eye damage due to sunlight exposure. This is because ultraviolet light is easily absorbed by the eyes; the lower amount of melanin present in light-coloured eyes means less protection from ultraviolet rays and a greater risk of long-term eye damage. There are several ways to protect your eyes against this damage. First, always wear sunglasses when you’re outside in direct sunlight, and if you wear eyeglasses make sure to use prescription sunglasses outside. Alternatively, consider laser vision correction from LASIK MD. The safe and speedy procedure can free you from the need to wear glasses, and you won’t sacrifice the long-term health of blue or light-coloured eyes for short-term sight.

While it’s unclear exactly what caused the OCA2 switch to “flip,” the mutation is directly responsible for blue-eyed individuals across the globe. Along with a common ancestor, those with blue eyes share a common need for greater eye protection, since the lack of melanin that produces sky, sea, or dusky blues also limits resistance to sun damage.