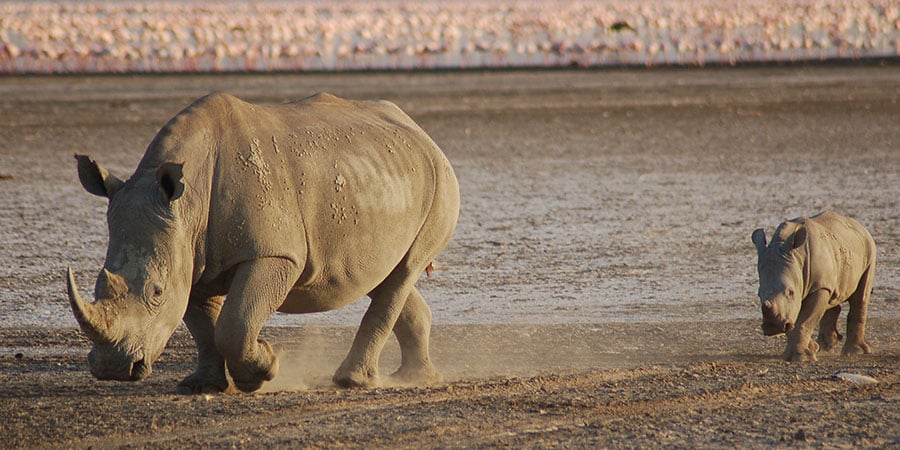 5 animals with the worst vision

For every majestic eagle and elegant horse that Mother Nature gives us to marvel at, there are animals that don’t boast quite as impressive abilities. Evolution has given every animal a purpose and the tools to achieve it, but that hasn’t saved a few critters from drawing the short stick in the lottery for good vision. Check out these five animals with the worst eyesight, but be warned – some of these creatures have vision so bad not even LASIK could help them see clearly again.

This beast of the African Savannah is most well-known for its impressive horns, and it’s often depicted charging targets with incredible speed. The real question is – just how much distance do you have to keep yourself safe from this rhino onslaught?

National Geographic has the answer: 15 feet.

Even though rhinos can charge up to 30 miles per hour, they can’t distinguish between a human and a tree at 15 feet. Unless rhinoceroses can clearly hear and smell you, they have no way of knowing where you are in physical space. Next time you go on a safari, leave your camouflage home.

Contrary to popular opinion, bats aren’t blind. However, this doesn’t mean that they can spot a tasty bug across a cave with no trouble – in fact, bats’ vision is so bad that they use a system of echolocation to hunt, instead.

The Smithsonian Institution explained that, to locate airborne bugs or other food sources, bats emit a series of supersonic screeches that bounce off the target and rebound back to the bats. Depending on the angle the wave returned, they fly in the direction of the obstacle.

These animals may suffer more from an issue of psychology than vision impairment, but there’s a reason why bulls have acquired a reputation that they charge at the sight of red. Matadors in Spain have used decorative red capes for centuries to taunt raging bulls toward them in a thrilling feat of daring.

The catch is, bulls don’t really run at the sight of red. Discovery Channel explained that color isn’t important to a bull, but motion is. On an episode of the television show “Mythbusters,” multicolored flags drew no response from a bull when stationary. When the flags were shaken and moved, the bull responded to whichever was moving the most.

For everything science understands about life on land, there’s just as much undiscovered about what goes on deep under the sea. Three-quarters of the globe is covered in water, but how does that impact vision for deep sea dwellers?

A 2004 study by Swedish researchers at the University of Lund found that, as natural light becomes more diffuse the deeper you go into the ocean, the fish that live at the greater depths have evolved to have terrible vision – there’s just no use for it. This means species like the fangtooth fish, which has been found at depths of 16,500 feet, are barely capable of detecting light at all.

Just like fish evolved away from high-quality vision, moles might be the land-dwelling equivalent of those deep sea squinters. Researchers at the University of Aberdeen found that some moles use their eyes so infrequently that some even have flaps of skin grow over their eyes.

Bad vision might be better than none at all.