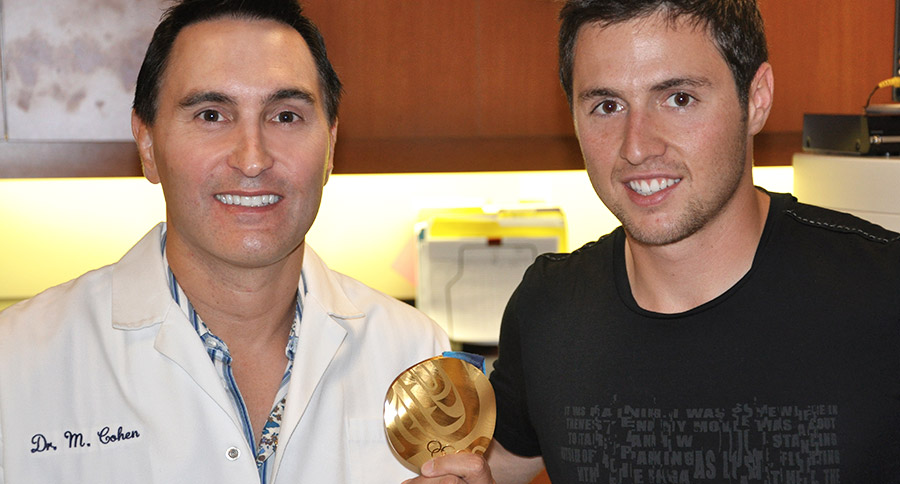 Olympic athletes know that to perform their best, they’ve got to be at their best—mentally and physically. And when we say “physically,” we don’t just mean an athlete’s strength or endurance: it can also mean factors like their eyesight. This rings especially when the sport at hand requires strong vision for heightened performance—such as freestyle skiing. Anything less than clear vision has the potential to interfere with an athletic performance which is why so many world-class athletes turn to LASIK.

When it comes to reaching for the stars, who better to take advice from than an Olympic athlete? Alexandre, a gold-medal skier, was tired of relying on his contact lenses or glasses while trying to see clearly. Some years ago, he sought the expertise of LASIK MD to help him discover freedom, in the hopes of taking his skills from top-tier to virtually untouchable. Here’s the story of how his laser vision correction procedure went.

A little about Alex

Alexandre Bilodeau, a freestyle skier who has competed at the highest level, knows a thing or two about going for the gold. His talent in the sport first caught the attention of skiing fans when, at the age of 14, he became the youngest athlete to perform a triple jump in a competition. After that achievement, Alexandre’s career reached new heights.

You may remember him from his stellar gold-medal winning performance at the 2010 Winter Olympics in Vancouver: he took home the gold medal and was the first Canadian athlete to do so on Canadian soil. His history-making career continued in 2014, when, at the Winter Olympics in Sochi, he was the first Olympian in history to defend his gold medal in any freestyle skiing event.

He’s won a host of other competitions too: Alexandre is a three-time FIS (International Ski Federation) World Champion in dual moguls and a two-time Worlds silver medalist in moguls. These accolades—as well as his off-slope involvement in charitable initiatives—helped Alexandre become one of Canada’s most celebrated athletes. And although he’s since retired from the sport, his clear vision continues to serve him well in his daily life.

Excelling in his sport was a huge reason why Alexandre opted for a LASIK procedure. As a competitive mogul skier, he felt that his vision was vital to his immediate and long-term success on the hills. “I [needed] to be able to read the moguls down to the smallest detail, and when I’m doing jumps I [wanted] to be able to spot my landing.” For years, Alexandre wore glasses. Eventually, he made the switch from wearing glasses to contact lenses. And while contact lenses initially afforded him more flexibility, he still encountered his share of annoyances with them. For one thing, he didn’t enjoy putting them in and taking them out every day. Travelling for competitions was yet another inconvenience.

“I always had to make sure I didn’t forget to bring extra contact lenses, contact lens cases, and enough solution,” said Alexandre. But that’s not all: with contacts, he found he was always worried about getting an eye infection—something quite common with daily contact lens wear.

Alexandre knew he needed a vision correction method that would keep up with his busy and active lifestyle. Ultimately, he decided to turn to LASIK as a means to help improve his performance—and simplify his life, because he found that the majority of his experiences with training while wearing contacts proved to be less than desired. Wearing contacts, he found, was not the optimal set-up for skiing.

“[Before LASIK], I trained and competed with contacts on, so I always had the worry of losing a lens in the middle of my run or during a jump,” he said. Eventually, though, Alexandre felt like he needed to find a different solution than what his glasses and contact lenses could offer.

One day, Alexandre made the decision—one he hasn’t looked back on since: “I was tired of the daily hassle of corrective lenses and the problems they caused during competition – so I turned to LASIK MD.”

Alexandre’s experience at LASIK MD went above and beyond his expectations. He admits that, before being deemed a candidate, he was a little nervous about the procedure that lay ahead. But, the care and expertise of the staff at LASIK MD helped put his worries at ease—plus he felt confident in the knowledge of his surgeon.

“The LASIK MD staff was so friendly and my surgeon, Dr. Mark Cohen, took time to explain the procedure and answer my questions.” Overall, he says, he was impressed by how the surgery took less time than a run on the moguls. In total, Alexandre says he couldn’t believe that the whole procedure lasted only about 10 minutes. He couldn’t believe that it was completely painless, either!

As for his results? Alexandre was amazed by just how quickly his vision improved. “The next day I was seeing 20/20!” Today, though his daily routine has changed significantly (though he still enjoys skiing recreationally each winter) Alexandre’s vision remains the same: stable and clear.

Alexandre adds that he would absolutely recommend that his friends and family pay a visit to the experts at LASIK MD. “LASIK has also given me more confidence and enabled me to focus 100% when competing because I didn’t have to worry about my vision,” he says. “Because of LASIK, I no longer have the burden of glasses or contacts in my life.” he says.

“Thanks, LASIK MD, for your professionalism and expertise!”